Carrie Fisher Says She Was Pressured to Lose Weight for Star Wars: The Force Awakens #MMBComic 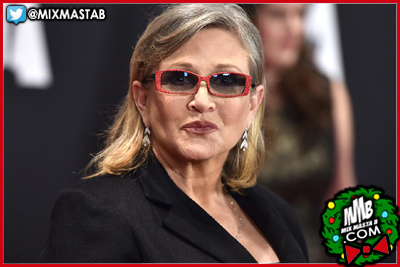 Carrie Fisher says she was pressured to lose over 35 lbs. to reprise her role as Princess Leia in the highly anticipated Star Wars: The Force Awakens. The star, 59, spoke candidly about the emphasis on female actresses to slim down in Hollywood, and says that hasn't changed since she first starred in the films 38 years ago.
"They don't want to hire all of me – only about three-quarters!" Fishertold Good Housekeeping U.K. "Nothing changes, it's an appearance-driven thing. I'm in a business where the only thing that matters is weight and appearance. That is so messed up. They might as well say get younger, because that's how easy it is." But Fisher did what was requested, and changed her nutrition and workouts to drop the weight.

"I did it the same way everybody has to – don't eat and exercise more! There is no other way to do it," she says. "I have a harder time eating properly than I do exercising. It's easier for me to add an activity than to deny myself something."

But the actress and writer says slimming down leaves her conflicted. "When I do lose the weight, I don't like that it makes me feel good about myself. It's not who I am," she explains. "My problem is they talk to me like an actress but I hear them like a writer." Fisher says that obsession with weight extends outside the movie industry to Los Angeles as a whole. "We treat beauty like an accomplishment and that is insane. Everyone in LA says, 'Oh you look good,' and you listen for them to say you've lost weight," she explains. "It's never 'How are you?' or 'You seem happy!' " And growing up with her famous parents, singer Eddie Fisher and actress Debbie Reynolds, 83, Fisher says she never felt like she was as attractive as her mom. "I looked at my mother and said, 'Wow, she is gorgeous and I don't look like her, therefore I'm not pretty,' " she explains. "'And my father doesn't visit – I mustn't be pretty because he likes pretty women.' " "You think, 'I'll go into show business because then I'll get enough love and they will put make-up on me properly and then my life will work.' " Fisher relayed her experience to new Star Wars actress Daisy Ridleyand advised her to avoid getting forced into a "sex symbol" role – like Fisher in 1983's Return of the Jedi, when she wore the iconic gold bikini. "You should fight for your outfit," she warned Ridley. "Don't be a slave like I was."