BIG MIKE VS ADAM COLE THIS SATURDAY IN PHILLY! #MMBROH 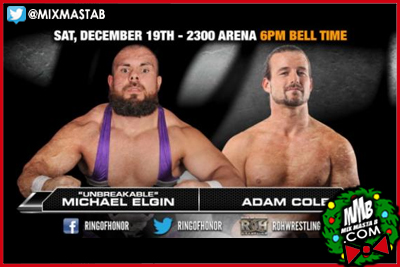 FINAL BATTLE is this Friday night!  After more than a decade, FINAL BATTLE is returning to Philadelphia. On December 18th, Ring of Honor will present FINAL BATTLE 2015 on Pay-per-view. Plus, the very next night, we will return for the AFTERMATH and a huge television taping!  .  FINAL BATTLE is a must-see event for all professional wrestling fans! And the next night, all of the fallout will spill into a massive ROH television event.   This is a can't-miss combo of ROH events to close out 2015 hotter than ever!
ADAM COLE v. MICHAEL ELGIN
Alfred Lord Tennyson is attributed with the poignant observation “'Tis better to have loved and lost than never to have loved at all.”
But is it?
For the FIRST TIME since Best in the World 2014, ADAM COLE and MICHAEL ELGIN will face each other in singles competition in Philadelphia with MAJOR ROH World Title implications! With both stars at the top of their respective games, who will get one step closer to recapturing their love and who will take a step in to the madness of facing a love lost?
Cole has sacrificed relationships, stabbed friends in the back, and turned his back on the fans to reach the pinnacle of ROH, the poison of having lost the ROH World Title running through his veins while serving as the chip on his shoulder. Cole became ROH World Champion by winning a tournament at Death Before Dishonor XI in 2013. His opponent in the final? Elgin. It wouldn’t be the last time Cole and “Big Mike” crossed paths.
Cole and Elgin were two of the three combatants in the main event of Final Battle 2013 while Cole used nefarious tactics to retain his ROH World title. “The Panama City Playboy” attempted to humiliate and humble “Big Mike” at every opportunity before Elgin finally extracted his revenge and won the richest prize in ROH in Nashville. Elgin’s reign at the top of the mountain came to an end at the hands of Jay Briscoe, but both Cole and Elgin suffered similar effects following the loss of their championships.
Cole would spend months following an unsuccessful challenge at Final Battle 2014 not speaking. Elgin very publicly questioned the decisions of ROH officials, singling out matchmaker Nigel McGuinness, following his title loss. But despite their polar opposite personalities, the sour taste of no longer having the World Championship around their wastes have driven them to a new level in 2015 and both have let their squared circle success do the talking.
With victories over Roderick Strong, ACH, Dalton Castle, Christopher Daniels, and others following major shoulder surgery, Cole has not so quietly reasserted himself among the top of the heap in ROH in the second half of 2015. And with victories over Adam Page, Silas Young, and undeniable success as the tag team partner of Hiroshi Tanahashi in the G1 Tag League, “Big Mike” has established quite the transpacific reputation, showing fans in Japan the dominant force ROH fans have known for years.
For the VERY FIRST TIME since their classic ROH Title match in Nashville at Best in the World 2014, Cole and Elgin will square off in a one on one encounter, both men having tasted championship gold once and both men firmly once again among ROH’s elite. Surely to have the eye of ROH Matchmaker Nigle McGuinness, the winner of this bout could vault to the head of the line for a shot at the ROH World Title. You’re not going to want to miss this GIGANTIC bout with CHAMPIONSHIP IMPLICATIONS in Phialdelphia!
To witness witness the AFTERMATH of FINAL BATTLE 2015, click HERE!
Ring of Honor Wrestling presents
FINAL BATTLE - THE AFTERMATH
Saturday, December 19th, 2015
2300 Arena - Philadelphia, Pa
6pm Bell Time
Matches signed
WOMEN OF HONOR TAG TEAM MATCH
Mandy Leon & Sumie Sakai vs. Deonna Purrazzo & Hania The Huntress
Posted by Mix Masta B at Monday, December 14, 2015