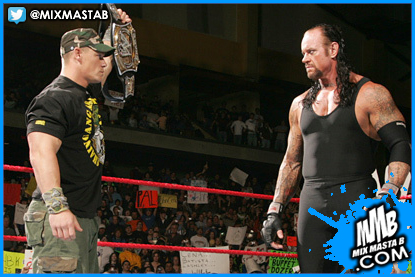 The injury to Seth Rollins gives WWE an opportunity to really think outside the box and give a young star or two a serious run in one of the main-event slots. Or WWE could choose the path of least resistance and tentatively pencil in John Cena vs. The Undertaker for WrestleMania 32.
Citing a report from PWInsider.com, Marc Middleton of WrestlingInc.com wrote the two Superstars are—at least for the time being—options for one of the main events of the biggest show of the year.
According to Middleton, the Wrestling Observer Newsletter's Dave Meltzer also questioned whether a WWE source was trying to throw him off the scent when telling him Cena and The Undertaker have other angles lined up for WrestleMania. Meltzer labeled the tip a possible "red herring."
First, Randy Orton suffered a shoulder injury that will keep him out for months. Then, Rollins tore his right ACL, MCL and medial meniscus, thus ruling him out for WrestleMania as well. Those are two potential headliners out of the equation, leaving WWE scrambling to find alternatives.
Cena currently remains off for an extended break as well, but isadvertised for a live event on Dec. 26 at Madison Square Garden. Depending on when or if he chooses to avenge his United States Championship defeat to Alberto Del Rio, Cena would be open for a major WrestleMania storyline.