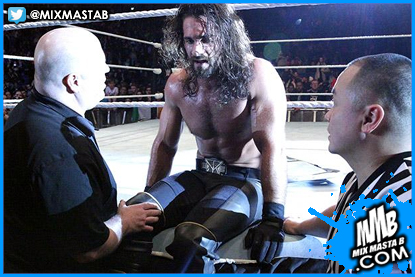 WWE World Heavyweight Champion Seth Rollins has torn his right ACL, MCL and medial meniscus, and will not be able to defend the title against Roman Reigns at Survivor Series. A tournament to determine a new champion will instead take place at the event.
As first reported on Twitter by ESPN, Rollins suffered the injury last night at a WWE Live Event in Dublin, Ireland, and is expected to miss six to nine months of action.
Details surrounding the Survivor Series tournament have not been finalized. The event takes place Sunday, Nov. 22, and will air live only on WWE Network.
CREDIT / SOURCE - WWE.com
Posted by Mix Masta B at Thursday, November 05, 2015