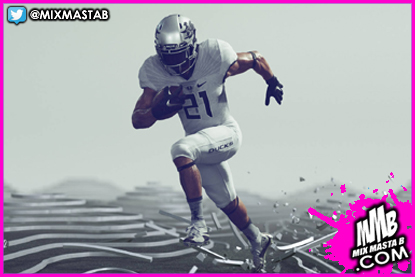 Nike and the University of Oregon Ducks introduce the new Oregon Pioneers football uniform, which emphasizes Oregon state history.
Oregon is a state that has bred innovators, freethinkers and risk-takers since its founding. Nike co-founder Phil Knight is the quintessential example, starting a company by selling shoes out of a car trunk and turning it into a $30 billion powerhouse. Despite Nike’s impressive evolution, he and his wife, Penny, still refer to themselves as "just a couple of kids from Oregon."


This maverick heritage is similarly embodied by Meriwether Lewis and William Clark, who introduced Oregon to the east in 1805, as a part of the Corps of Discovery commissioned by Thomas Jefferson. Aptly, the explorers serve as the key inspiration behind the new Oregon Pioneers football uniform, a freshly designed Nike Mach Speed uniform exclusively for the Ducks.
“We have many discussions with the Oregon athletes, equipment staff and coaches,” says Todd Van Horne, Creative Director for Nike Football. “For this inspiring new uniform, we want to celebrate the state and its great founders and innovators.”
Some of these celebratory references are overt while a few are more understated.
1. The Oregon Pioneers football uniform features a sublimated, tonal pattern of the Oregon Trail traversed by explorers. Highlighting northeastern and southern Oregon, as well as Eugene and Mt. Hood, the topographic collage covers the entire jersey.
2. Each uniform is unique and showcases a different area of the map, ensuring each player’s uniform features a different pattern, maximizing the fabric and producing less cutting-floor waste.
3. The uniform’s gray base is inspired by the achromatic look of a vintage map, accented with black numbering and the Ducks’ trademark tonal shoulder wings.
4. A silhouette of Lewis and Clark, along with The Duck, appears as a decal on the helmet. Wrapping both sides of the headwear, it features Lewis looking through a telescope and The Duck pointing west, a nod to the explorers.
5. The front bumper of the helmet presents the handshake found on the Thomas Jefferson Peace Medals that President Jefferson provided Lewis and Clark to give to individuals they encountered as a token of peace, friendship, prosperity and trust. “The handshake signifies both what Nike was built upon (with the agreement between Bill Bowerman and Phil Knight) and what Thomas Jefferson wanted to advance as the Corps of Discovery traveled west,” said Paul Sullivan, Nike NCAA football art director and lead University of Oregon designer.
6. The back of the helmet is adorned with a 33-star flag. The official United States flag that resulted from Oregon’s acceptance into the union in 1859, it existed for two years before Kansas added a 34th star.
7. The lines on the helmet represent the principal legs of the 2,200-mile-long Oregon Trail.
8. Using the same sublimated pattern of the Lewis and Clark Trail, the uniform’s socks showcase the Lewis and Clark-inspired Duck who, similar to the original trailblazers, is pointing west.
9. The words “Salute The State” are embroidered on the inner back neckline of the jersey, a tribute to the state, its inhabitants, its history and its future.
10. The Ducks will wear the new Oregon Pioneers uniform against Washington State on Saturday, Oct. 10. Special edition jerseys, hoodies, hats and t-shirts are available for purchase at Nike.com and Fanatics.
See gallery of the new uniforms HERE.
CREDIT / SOURCE - http://www.goducks.com