Ronda Rousey Agrees To Go To The Marine Ball, But Has Some Rules About Hanky Panky 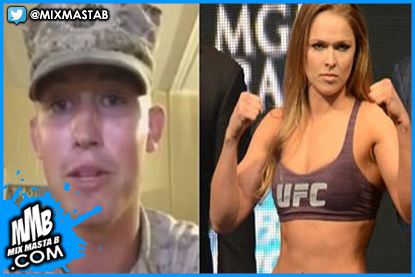 Lance Corporal Jarrod Haschert took a flyer last week and asked Ronda Rousey to the Marine Ball on Dec. 11. We’ve seen this kind of stunt before, and a few have failed quite miserably. But Haschert was adamant in his proposal, saying, “I love everything you do, and I think you are a phenomenal person. It would be my dream come true.”


Naturally, a photog for TMZ Sports caught up with Ronda and put her on the spot. How could she say no, really? Especially to a pap asking such hard-hitting questions.
“I just saw it the other day, and I actually can go. But I don’t know how to, like, hit him up and say, ‘Yeah, I wanna go with you.’ I would go. I would go for sure.”
And then it got awkward when the photog mentioned some funny business. Be worse, guy.
“He’s got to be a gentleman, you know? I’m not a first date kind of a girl. But, you know, I don’t know.”
So congratulations, Mr. Haschert. You got your date with Ronda Rousey. Sure, it took almost 5 million views on Facebook and some peer pressure from a random guy on the street, but hooray! Have fun, good sir. (Via TMZ Sports)
Posted by Mix Masta B at Wednesday, September 02, 2015