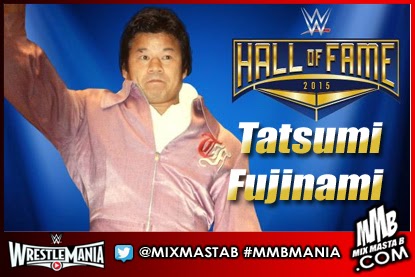 An international legend will take his place in history on the eve of WrestleMania 31, as Tatsumi Fujinami will be inducted into the WWE Hall of Fame.
Tatsumi Fujinami photos | Video highlights
Fujinami, also known as “The Dragon,” trained under WWE Hall of Famer Antonio Inoki, making his debut in the early 1970s. A master of the mat and the creator of the Dragon Suplex and Dragon Sleeper, he quickly became a star in the early days of New Japan Pro Wrestling. He soon began splitting his time between Japan, Mexico, Canada and the United States. In America, he made his mark in WWE, where he used his mastery of the mat to capture the WWE Junior Heavyweight Championship in Madison Square Garden.


Visit Fujinami's WWE Hall of Fame profile
Fujinami defended the title in WWE and his home country, taking on the likes of Tiger Mask, Dynamite Kid and others in classic bouts, making it the premier title in its weight class. “The Dragon” also added another American accolade to his name when he captured the WWE International Championship in August 1982. He continued to compete sporadically for WWE through 1985, before returning to Japan to take his career in a new path.
“The Dragon” moved up in weight class, competing with the heavyweights, and proved to be just as successful. He defeated the monstrous Vader to capture his first of six IWGP Heavyweight Titles, one of the most prestigious in Japan. Fujinami created shockwaves worldwide in March 1991, when he defeated Ric Flair in front of over 50,000 fans at the Tokyo Dome to win the NWA World Championship. With the victory, he became the first man to hold the NWA and IWGP Titles.
Fujinami returned to America several times in the early 1990s, including the inaugural WCW SuperBrawl, where he defended the NWA World Title against Flair. He remains a revered figure in Japan, where he promotes wrestling shows to this day, and occasionally stepping back into the ring to remind the younger generation why he is called “The Dragon.”
Now, Fujinami will be immortalized in sports-entertainment history, as he takes his place in the WWE Hall of Fame.
Posted by Mix Masta B at Thursday, March 19, 2015