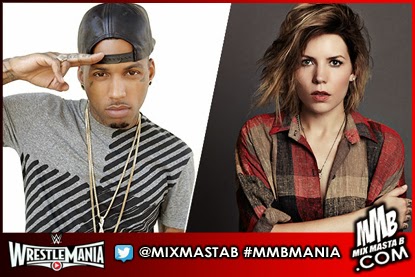 STAMFORD, Conn. – WWE today announced that Skylar Grey, Kid Ink and Travis Barker will take the stage at WrestleMania 31 on Sunday, March 29, at 7 p.m. ET/4 p.m. PT, from Levi’s Stadium in Santa Clara, Calif.
A medley of the WrestleMania 31 theme songs — “Rise” by David Guetta, featuring Grammy-nominated singer/songwriter Skylar Grey and “Money and the Power” by multi-platinum rapper Kid Ink — will be performed by Skylar Grey and Kid Ink, who will both be joined by legendary drummer Travis Barker.


Grey has co-written countless hits for powerhouse artists including Eminem, Dr. Dre and Diddy. Most recently, she can be found on the best-selling “50 Shades of Grey” soundtrack with “I Know You” and on the just-released “Furious 7” soundtrack with “I Will Return.”
Check out photos of Diddy and Skylar Grey at WrestleMania 29
Kid Ink is a rising star in his own right. His most recent album, “Full Speed,” debuted in the top 10 and features collaborations with Usher and Chris Brown. Like Grey, he is also featured on the “Furious 7” soundtrack with his song “Ride Out.”
Musician and producer Travis Barker is most noted as the drummer for the rock band Blink-182. Known as the go-to drummer, he has performed with artists of all genres, collaborating with Eminem, Yelawolf, Lil Wayne, Rihanna as well as pop stars Pink and Demi Lovato. Currently he is producing the new duo Prayers, and working on a book, “Can I Say,” that will come out this spring.
This year, more than 70,000 fans from all 50 states and more than 40 countries will descend upon the San Francisco Bay Area for a weeklong lineup of festivities in celebration of WrestleMania 31.
WrestleMania 31 can be seen on WWE Network and pay-per-view in more than 175 countries. Be sure to follow #WRESTLEMANIA, @WWE and @WrestleMania to join in the conversation.
Posted by Mix Masta B at Monday, March 23, 2015