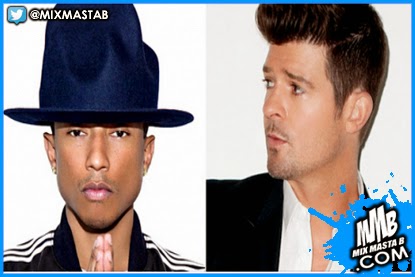 In a landmark decision for the songwriting industry, a jury in Los Angeles has ordered “Blurred Lines” songwriters Robin Thicke and Pharrell Williams to pay $7.3 million to the family of Marvin Gaye for copyright infringement.


In the high-profile case, Gaye’s family had argued that the 2013 smash hit “Blurred Lines” copied their father’s 1977 song “Got to Give It Up” and sued Thicke, Williams and Clifford Harris Jr., aka T.I. The three had sought a jury determination that the song was not an infringement, and the Gaye family filed a countersuit.
“Right now, I feel free,” Marvin Gaye’s daughter, Nona Gaye, said after the verdict. “Free from … Pharrell Williams and Robin Thicke’s chains and what they tried to keep on us and the lies that were told.”
The attorney for the Gaye family, Richard Busch, will also seek to halt sales of “Blurred Lines,” and said he will file official paperwork by next week.
“Blurred Lines,” nominated for record of the year at the 2013 Grammys, was No. 1 on the Billboard single charts for 10 consecutive weeks. Since it was released, “Blurred Lines” has made nearly $16.5 million, with Williams and Thicke raking in over $5 million each. Overall, the family sought more than $25 million in damages. Gaye died in 1984.
Both Thicke and Williams appeared in court during the past week to defend their case, with much of the trial featuring comparisons between the songs. Listening to the juxtaposed bass lines of the two songs in question, Williams even admitted the similarities, saying, “It sounds like you’re playing the same thing.”
Still, while testifying last week, Williams said the two songs share “feel — not infringement.”
The proceedings were perhaps most notable for the presence of Thicke, who sang and played the piano as he defended the work as original and said he was intoxicated when he gave media interviews in which he talked about Gaye’s influence on the works. He also said that he was mistaken when he claimed credit for writing part of the song.
The eight-person jury closed its full day of closed-door deliberations on Friday after hearing a week of testimony, with court resuming on Tuesday.
Posted by Mix Masta B at Tuesday, March 10, 2015