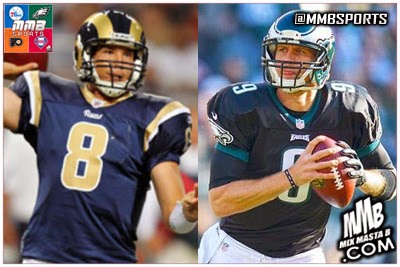 The St. Louis Rams and Philadelphia Eagles are closing in on a swap of starting quarterbacks as the NFL's new league year opens Tuesday afternoon.
Nick Foles, who emerged as the Eagles' starter in 2013, is going to the Rams in exchange for Sam Bradford, the No. 1 overall pick in the 2010 NFL draft. The trade talks were first reported by ESPN NFL Insider Adam Schefter.
Bradford, 27, missed the entire 2014 season after tearing his left anterior cruciate ligament for the second straight season. Foles, 26, missed the second half of the season after breaking his collarbone in a Week 9 game against Houston.

In the 18 games Foles started for coach Chip Kelly, his record was 14-4. Foles surpassed Michael Vick as Kelly's starter by throwing 27 touchdown passes and just two interceptions in 2013. Foles went to the Pro Bowl after the 2013 season and was named offensive MVP of the game.
Playing behind an injury-riddled offensive line in 2014, Foles' numbers weren't as eye-popping. He threw 13 touchdowns and 10 interceptions. But Foles' record in his eight starts was 6-2.
Bradford's record as a starter in St. Louis was 18-30-1. In his rookie season, when Bradford went 7-9, the Rams' offensive coordinator was Pat Shurmur. Shurmur is now Kelly's offensive coordinator in Philadelphia.
Bradford missed six games in 2011, but the Rams were just 1-9 in the 10 games Bradford started that season.
The injuries and Bradford's contract, which would pay him $13 million for 2015, had the Rams looking to go in a different direction. Foles, a third-round pick out of Arizona in 2012, was scheduled to earn $1.52 million in the final season of his rookie contract.
It is unclear whether the Eagles plan to commit to Bradford as their starting quarterback or if this trade was part of a larger plan. Speculation has been rampant that Kelly would try to move up in the first round of this year's draft for Oregon quarterback Marcus Mariota.
On Sunday, Kelly re-signed backup quarterback Mark Sanchez on a two-year contract worth $9 million.