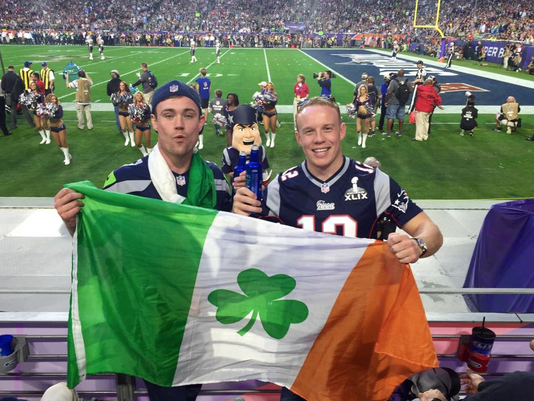 The NFL isn't going to like this.
Two football fans from Dublin, Ireland—one rooting for the New England Patriots and the other for the Seattle Seahawks—made the flight to Arizona for Super Bowl XLIX. Despite not having tickets to the big game, Paul McEvoy and Richard Whelan thought they'd give it a shot and try to find a way to sneak in.


Somehow, their plan worked.
Whelan told RTE Radio One Morning Ireland (h/t Cormac Byrne from The Independent) how he and McEvoy manged it:

Our game plan was to be super confident.
We just thought if we pretend we belong there, nobody will question us.
Between one layer of security and another, we just walked in behind these 20 first-aid workers, straight up to the front door and hid in behind them.
Paul was looking at his phone, pretending to text me, as if we had just popped out to look at an email we got or something.
We walked past another security guard that just wasn't paying attention.
We could see the field then, the stadium and the atmosphere was insane.
I remember looking at Paul's face, we just couldn't believe we got in.

The best part? The two fans found empty seats in the fourth row, worth an estimated $25,000 each. According to Whelan, "We spoke to this guy and told him we had sneaked in. He told us the girls beside him were in the halftime show and so wouldn't be coming back to their seats after halftime."
While there, they managed to take a selfie with former safety Lawyer Milloy, who played for both the Patriots and Seahawks during his 15-year career.
Per Byrne, after the 28-24 Pats victory, the two fans hopped on a VIP bus, which took them back to the street of their hotel.
Posted by Mix Masta B at Thursday, February 05, 2015