The cream rises to the top: 'Macho Man' Randy Savage to be inducted into WWE Hall of Fame #MMBWWE #MMBMania 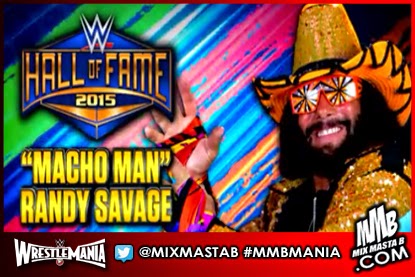 As officially announced Monday on Raw, “Macho Man” Randy Savage will finally be inducted as the first member of the WWE Hall of Fame’s Class of 2015 the night before WrestleMania 31 at the SAP Center in San Jose, Calif. Live during the biggest weekend of the year in WWE, the late legend will be inducted by longtime friend, rival and fellow WWE Hall of Famer Hulk Hogan.


Rumors began to trickle in early Monday morning with TMZ and a live breaking news update on WWE Network reporting on the possible announcement. Speculation reached a fever pitch six weeks ago when “Stone Cold” Steve Austin pressed WWE Chairman Vince McMahon on the issue during a live podcast special.

For many, the Hall was simply not complete without the iconic “Macho Man.” Now, that all changes. As WWE rose to national prominence, no Superstar rivaled Hogan’s popularity as much as the flamboyant “Macho Man.” An early highflier with bright neon trunks, Randy Savage was the definition of a larger-than-life superhero. Nobody looked anything like him before he came along, and no one has come close since.

Son of legendary grappler Angelo Poffo, “Macho Man” earned his now famous nickname while practicing his first love: professional baseball. After struggling in the minor leagues for several years, Savage left the ball field behind and joined the family business. He was an instant home run, and it wasn’t long before Mr. McMahon recruited the budding star, who joined WWE shortly after the first WrestleMania.
Upon his arrival, Savage tore up the sports-entertainment textbook and wrote a new one from scratch. His introduction of Miss Elizabeth as his valet was revolutionary, and his manic style of competition kept opponents and crowds on their toes. Surrounded by “Pomp and Circumstance,” Savage orchestrated one of the greatest matches of all time against Ricky Steamboat at WrestleMania III. One year later, “Macho Man” captured his first WWE Championship.

In 1988, both he and Hogan — The Mega Powers — reigned as WWE’s biggest and brightest stars, but the duo “exploded” in brutality at the legendary WrestleMania V main event. Their bitter rivalry over Elizabeth remains one of the most memorable not just of that period, but in squared circle history.
His celebrity soaring, “Macho Man” became a household name, supported in part by his ubiquitous role as Slim Jim pitchman. Savage faced Ultimate Warrior, Ric Flair and others in historic WrestleMania matches, and then in WCW, he reinvented himself for the company’s rebellious late ‘90s, adopting a darker look. His matches didn’t miss a beat, facing NBA bad boy Dennis Rodman in a memorable brawl and Diamond Dallas Page in an intense trilogy.
As his in-ring career winded down, “Macho Man” stepped away from the spotlight, and a competitor who once thrived on being the most outlandish happily remarried and began enjoying life out of public view. When he passed away in 2011, the outpouring of emotion from WWE fans and the media reminded everyone that the world had lost a game-changer and superhero. And now, after years of clamoring, fans will finally see Savage become immortalized as a WWE Hall of Famer.