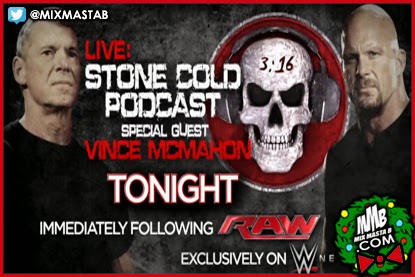 Former WWE Superstar CM Punk sent shockwaves through the WWE this past week, when he spoke openly about why he left the company back in January. The near two-hour podcast has been downloaded a ton. So much so that it shut down Colt Cabana’s website on more than one occasion. Clearly due to what he said, WWE management is not happy with the former WWE Champion.
Punk’s words were heard by all within WWE. Management may not be fans of what he claimed, but the locker room universally seemed to enjoy it. It is said that Punk spoke on stuff that a lot of the WWE talent were having issues with. Many are just too afraid to speak up, so Punk doing it was a big deal to them. Since many heard what he said, many would speculate that what Punk said will be worked on.

WWE sent out a press release through Yahoo! Sports, claiming that they had a great medical team led by Dr. Joseph Maroon. The problem is, they didn’t address much else in regards to it. They also did not tout the greatness of the doctor Punk claimed was the biggest issue for him.
Now we have a WWE podcast set to be on the WWE Network tonight immediately following WWE RAW tonight. Vince McMahon will be the special guest on Stone Cold’s podcast, where he will answer a variety of questions. It will be live and Austin will leave nothing out… this according to Austin himself. According to What Culture, it appears that the Punk comments will be brought up on the podcast at some point. Austin would have to ask them because people want to hear McMahon’s response. WWE couldn’t ignore this.
The Wresting Observer’s Brian Alvarez claims that if they address Punk on the podcast, Vince will have a company answer that will probably not tell us much. However, Vince and Punk have been relatively close over the years. One would imagine if anyone would speak his mind on this issue, it would be Vince. Would Austin accept such a political answer from Vince? Maybe not. You’d have to think that the Rattlesnake would know when Vince is trying to avoid things.
We can probably assume that Austin and McMahon have already spoken about what they will be talking about. They will most likely hit on a lot of hot-button issues that we’d want to hear McMahon talk about. However, most fans are concerned about his thoughts on CM Punk.
While we may not hear him talk about some things we want to know, we at least know Punk will be brought up at some point. How long it will go on, and what exactly will be said is uncertain. WWE got a solid right cross by Punk with the podcast, and they are now wobbly due to it. How they respond will tell fans all they need to know about WWE. So we can assume whatever is said will be carefully planned out.