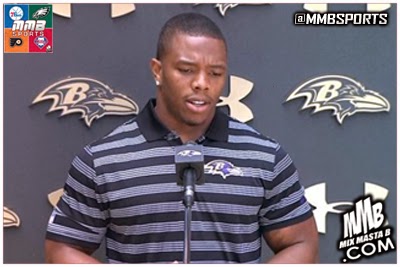 Ray Rice’s professional football relationships are over — permanently with the Ravens, indefinitely with the NFL. And you can add one more to the list of companies severing ties with the running back: Nike.


As reported by ESPN sports business reporter Darren Rovell, Nike has terminated its endorsement contract with the disgraced Rice, after a video surfaced that documented the horrifying assault of his then-fiancée (now wife) back in February.
Rice, who has worn Nike during his entire six-year NFL career, was cut by the Baltimore Ravens yesterday, and currently faces an indefinite suspension from the NFL. The Ravens are now offering a jersey exchange to any fans who purchased Rice’s jersey.
CREDIT / SOURCE - Sir Lucas Leftfoot / NIKE BLOG
Posted by Mix Masta B at Wednesday, September 10, 2014