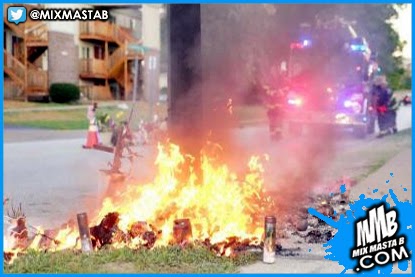 Although still on the radar, the spotlight pointed on the shooting death of Michael Brown and the events that followed in Ferguson, Mo., have noticeably dimmed. That reality is brought on by varying factors, including a new war, the 24-hour news cycle, and the Internet, which has even less of an attention span than cable news. Then there is the fact that “in order to keep peace” in Ferguson, the Department of Justice has effectively banned the media from covering town hall meetings between city leaders and community residents.
Well intentioned in their minds or not, the move was in vain.  You can try and put a band-aid on a serious wound all you like, but it won’t make it any less painful let alone noticeable. When it comes to Michael Brown’s death and the source of it and the treatment of those who protested it, there is a noted hatred there. Less cameras won’t make that reality any less visible. If one needed any reminder of that, look no further than Brown’s memorial being burned down on Tuesday morning.

Capt. Jeremy Corcoran of the Ferguson Police Department revealed that the fire started around 6:45 a.m. Though the cause of the fire has not been determined, there is reportedly evidence that candles were used within the memorial. Residents are suspicious that the fire was intentional, though, and even if that proves not to be the case, they are angry at the police officers who apparently arrived at the scene but made no attempt to put out the blaze.
In response, Chief Jackson released the following statement:

We’re all saddened by the fire that was reported at one of the Michael Brown Memorials this morning and are trying to obtain as much information as possible to determine what happened. At this time the cause is unknown.
To anyone who believes we didn’t do everything in our power to put this fire out I want to apologize and let you know that was not the case. Some of our police cars are equipped with an emergency kit that includes a fire extinguisher and Sgt. (Harry) Dilworth was first on the scene and attempted to put the fire out but couldn’t so he alerted the Fire Department and they ultimately put out the fire.
Anyone who has any information or videos please reach out to us as this will help as we investigate this incident.

Furthermore, a spokesperson noted that an officer on duty, Sargent Dilworth, had a fire extinguisher and did indeed try to put out the fire.
Yet, there a local resident uploaded a video on Facebook with the caption “police watched mike brown memorial burn.” You can hear the sadness in her voice as she asks, “Who would do this?” There are alsotweets that read, “No police in sight.”
Hours later, the memorial was put back in place.
It is a testament to the commitment Ferguson residents have to honor the life of Brown. Unfortunately, it also speaks to other, less ideal circumstances: That even in death, Michael Brown continues to be devalued. That there remains a suspicion of area law enforcement. That a divide lingers. That even if the national media looks away, the problems there continue to exist and can be easily exposed.