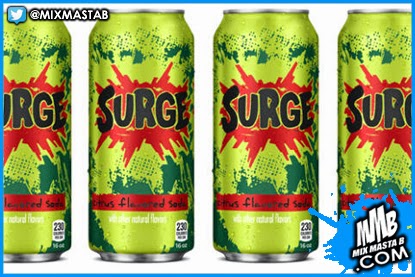 Surge, a citrus-flavored Mountain Dew knockoff that was discontinued by Coke about 12 years ago, has reappeared in limited supply today. The only place to get it: Amazon.com.


Billed as the company’s first ever e-commerce reintroduction, the news was announced by the Facebook Fan site “Surge Movement,” whose 128,000 members lobbied for its return and paid for a billboard in Atlanta. Coke gave the drink a Twitter account, too, so loyalists can “follow the brand’s journey.”
“Surge is back,” the Facebook page’s organizers said, urging readers to buy and spread the word. “The Movement does not end here!”
At the website listserv.com, Surge is listed as No. 7 on a Top 10 list of discontinued sodas, beating out Hubba Bubba Soda. Surge, a sweet and caffeinated green pop, will be sold in 12-packs of 16-ounce cans printed with the original graphics for $14. Coke said it may expand the drink to other retailers and add to the campaign, depending on how consumers react.
“This will be a great learning experience for us and a refreshing opportunity for fans,” Wendy Clark, Coke’s president of North America Sparkling & Strategic Marketing, said in a statement.
Scott Williamson, a Coke spokesman, declined to say how much of the drink the company has produced intially.
Coca-Cola has struggled for decades to counter PepsiCo Inc. (PEP)’s Mountain Dew juggernaut. Surge was one of those efforts. Introduced in 1996, the last bottles and cans were offered in 2001, two years before the social-networking site Myspace debuted. Facebook would come even later.
At the Surge Movement Facebook page, founded just before Christmas 2011, fans shared a 1997 commercial for the drink. Another post showed a way to get “extremely rare” Surge syrup on Ebay.com. One fan photo shows an artifact that was discovered at a flea market in Okoboji, Iowa: a giant Surge bottle once used at events to ice down drink samples.
“I stole one of these when Surge first came out,” one commenter responded. “Sadly, it was lost at the top of Happy Jack Mountains outside of Laramie Wyoming when someone got in it and tried to ride it down a mountain. It was a prize possession.”
The group sold “The Surge Movement” t-shirts, and it crowdfunded a $4,000 billboard near Coke headquarters in Atlanta that read: “Dear Coke, We couldn’t buy Surge so we bought this billboard instead.” It’s the largest to “pledge” for the revival of any discontinued product.
The site’s managers urged fans to call Coca-Cola routinely with reminders like, “Did you make your call today?” A mysterious undated video posted yesterday showed the Facebook page’s administrators meeting at a hotel in Atlanta. Users wanted to know why but they weren’t saying.
It’s no wonder Coke keeps trying. Mountain Dew, the fourth-best-selling soft drink in the U.S., has been one of the few bright spots in PepsiCo’s soda lineup in recent years as consumers drink less soda. Popular with teens, video gamers and extreme sports enthusiasts, Mountain Dew outperformed both the soda category and Pepsi-Cola last year, according to Beverage Digest data.
Coke may have found its opening, though. Dew’s volume sales declined last year. Sales volume for regular Dew fell 2.2 percent, compared with declines of 3.6 percent for Pepsi-Cola and 3 percent for the category.
CREDIT / SOURCE - Duane D. Stanford / Bloomberg
Posted by Mix Masta B at Wednesday, September 24, 2014