By now you’ve likely dissected every aspect of Nicki Minaj’s “Anaconda” video. You know, for research purposes, of course. But one point you may still be scrutinizing is whether Nicki’s bouncy lap dance made Drake, how do we put this delicately?… rise to the occasion.


MTV News’ Rob Markman caught up with Nicki Minaj backstage at the VMAs after her “Anaconda” performance” and found out whether or not the Best Hip-Hop Video winner was able to contain his, ahem, excitement, during Minaj’s vigorous chair session.
“Drake, you know… he’s an actor,” Nicki said, with a serious eye roll “So he did a good job of containing himself. But after the lap dance he was excited like hell. He was like, ‘Yo, do you understand like I’m the man after this video come out?’” 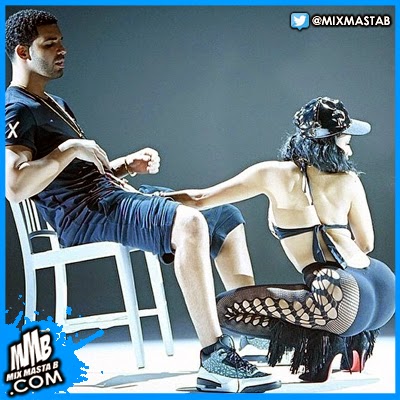 Nicki said it’s always fun to do stuff like that with Drizzy because of their close relationship. But just so we’re on the same page, when she says “excited” she means, like, EXCITED, right? Like, in the groinal region?
“I think a little bit of both,” she said.
Drake had already confirmed he was feeling it last week, when he posted a photo from the shoot with the message, “Ayyyyyyyye @nickiminaj way way wayyyyyy up. Def the best invite to a video shoot EVER. #ViewsFromMyChair #MyAnacondaWasWayUp.”
Posted by Mix Masta B at Tuesday, August 26, 2014