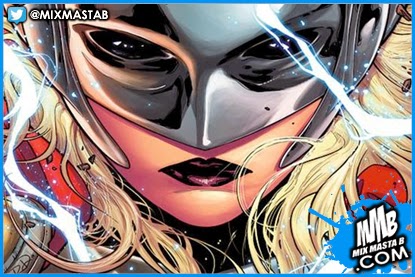 Ladies! Are you tired of not seeing a representation of yourself in the male dominated world of comics?
Are you depressed that the Marvel Cinematic Universe is entering Phase Three and there are still no plans (announced) for a female-driven movie, despite having a plethora of awesome heroes—Black Widow and Captain Marvel, to name just two of the obvious—at their disposal?


Well here's a little something for you: Tuesday, the hosts of "The View" announced that come October, a woman will become the new Thor in the comic book canon.
We were slightly skeptical ("The View," dudes?) until we read this quote by the comic's writer, Jason Aaron, in Marvel's press release: "This is not She-Thor. This is not Lady Thor. This is not Thorita. This is THOR. This is the THOR of the Marvel Universe. But it's unlike any Thor we've ever seen before."
OK, glibness gone. That sounds awesome. We're in.
Marvel calls the new incarnation "one of the most shocking and exciting changes ever to shake one of Marvel's ‘big three'" (Captain America, who is a man; Iron Man, who is a man; and Thor, who is a man...for now). The artwork will be done by Russell Dauterman.
"The inscription on Thor's hammer reads ‘Whosoever holds this hammer, if HE be worthy, shall possess the power of Thor.' Well it's time to update that inscription," explains editor Wil Moss.
(For the record, Storm and Wonder Woman have also wielded the power of Mjölnir.)
Dauterman continues, "The new Thor continues Marvel's proud tradition of strong female characters like Captain Marvel, Storm, Black Widow and more. And this new Thor isn't a temporary female substitute—she's now the one and only Thor, and she is worthy!"
Obviously, this is a change within the comic books and not necessarily the comic films, where Chris Hemsworth will (assumedly) continue playing Thor through, at the very least, the "Thor" threequel and "Avengers 3."
But then, who knows? SPOILERS-ISH: Just as Marvel appears to be laying the groundwork for Chris Evans' Captain America to eventually be replaced by Sebastian Stan's Winter Soldier—as the comics foretold—perhaps Hemsworth will pass his hammer on to a female successor in Phase Four or Five or Six or whatever. And then she will get an awesome "Thor" movie all her own.
CREDIT / SOURCE - JOHN BOONE / E! ONLINE