The N.W.A Biopic Has Its Cast: Meet The Actors Playing Dr. Dre, Ice Cube And Eazy-E 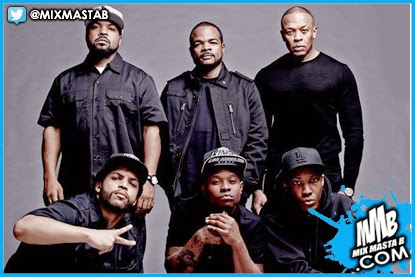 Last week, Ice Cube told MTV News that the cast for the upcoming N.W.A biopic, “Straight Outta Compton,” would be announced by the end of the month. And on Monday (June 16), that promise came true.


According to The Hollywood Reporter, Cube, Dr. Dre and Eazy-E’s widow, Tomica Wright, have given approval for the three actors that will star in the film: Cube will be played by his son, O’Shea Jackson, Jr.; Marcus Callender will star as Dre; and Eazy will be played by Jason Mitchell.
Jackson, Jr., doesn’t have experience in film, but if he can follow in his father’s footsteps, he’ll be alright. Callender, meanwhile, has appeared on TV shows like “Elementary” and “Blue Bloods” and is a graduate of New York’s Shakespeare Lab at the Public Theater. Mitchell has scored minor roles in movies including “Contraband,” “Broken City,” and “Dragon Eyes.”
So, it’ll be some relative newbies playing dudes who were now legendary but were just some hungry, fresh-faced kids when N.W.A first gained traction. Sounds like it could be a good fit. Cube certainly think so.
“It’s in very good shape,” Cube told MTV News while promoting “22 Jump Street” last week. “‘Straight Outta Compton’ will be shot in August. So we have a director Gary Gray, he’s our director…so [it's] full-steam ahead.”
“I’m totally involved, I’m engulfed in it,” he added, saying that the film will be shot in Compton. “This is our legacy, you can’t play with this, there’s no cutting corners,” he said. “I’m fully engulfed in that movie, very anal about it. It gotta be right.”
The 45-year-old also said that he’s trying to convince Dr. Dre to do some new music.
Sounds like a reasonable enough request.
CREDIT / SOURCE - Adam Fleischer & Josh Horowitz / MTV News