@RichelleRyan On The Cover Of XTREME Magazine For May - #MMBRRyan 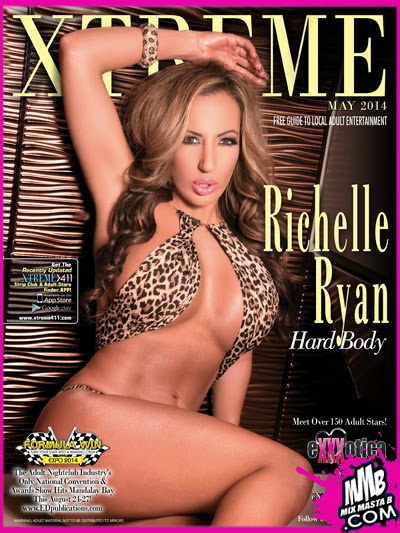 (HOLLYWOOD, CA) Adult entertainment superstar Richelle Ryan (http://richelleryanonline.com) rocks the cover of the May issue of Xtreme Magazine. Richelle is featured on the cover in a skimpy bikini that shows off all her delicious curves. Inside the magazine is a fun and sexy interview with the New York native as well as a gallery of some steamy pictures. In the interview, Richelle reveals how she keeps her body in tip-top shape, sex in public places and how she got into stripping.

“Xtreme magazine is a staple in the dancer and adult entertainment community,” said Richelle. “I’m very excited they have me as their cover girl this month. I definitely think my fans will love it and new fans are going to get to know me a lot better.”

The Richelle Ryan issue of Xtreme Magazine is available now. A digital version is available on the magazine’s official website; http://bit.ly/RichelleXM14.
Fans can have Richelle sign their copies of Xtreme Magazine when the award winning feature entertainer makes a special appearance at The Mansion Gentlemen's Club. May 29th though the 31st, Richelle will be taking the stage to show off her sexy moves. After every show Richelle will pose for pictures, sign autographs and have her memorabilia available, including her Attention Whore T-Shirt line. The Mansion Gentlemen's Club is located at 5268 U.S. 9W in Newburgh, New York. More information can be found on The Mansion’s website: http://mansiongentlemensclub.com.
Pick up the new issue of Xtreme Magazine for a fun and sexy interview with Richelle Ryan! With a scorching hot cover and stunning pictures inside the summer starts here!
Posted by Mix Masta B at Thursday, June 12, 2014