The Shield vs. Evolution at WWE Payback 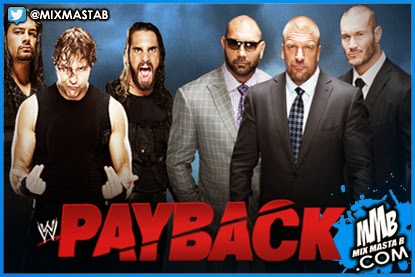 After toppling Evolution in a wild brawl that had a raucous capacity crowd shouting “This is awesome!” at Extreme Rules, The Shield will have another opportunity to prove themselves when they meet Triple H, Randy Orton & Batista at WWE Payback in a massive rematch.


How to watch WWE Payback | Triple H: “This will be over when I say it’s over”
Since their watershed victory over Evolution, Roman Reigns, Seth Rollins & Dean Ambrose have found themselves placed into one disadvantageous situation after another. On the May 5 edition of Raw, then-U.S. Champion Ambrose lost the champion’s advantage when Triple H forced him to defend the title in a 20-Superstar Battle Royal. Sheamus eventually won, ending The Lunatic Fringe’s 351-day title reign. Later that same night, Evolution dealt The Shield a brutal beatdown following The Hounds of Justice’s intense match against The Wyatt Family.
Triple H says Evolution, unlike their opponents, knows what it takes to win a war. Will the terrorizing triumvirate of The King of Kings, The Viper and The Animal defeat in detail and employ a divide-and-conquer strategy to upend The Hounds of Justice? Or will The Shield beat Evolution at their own game, scoring payback for Evolution’s sneak attacks and Triple H’s heavy-handed authority?
See what happens when natural selection takes place before our eyes at WWE Payback on Sunday, June 1, at 8 p.m. ET/5 p.m. PT, live on WWE Network and pay-per-view.
Watch WWE Payback on WWE Network
Posted by Mix Masta B at Monday, May 12, 2014