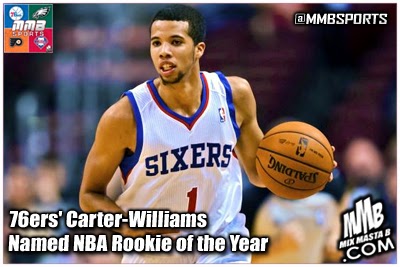 Philadelphia 76ers point guard Michael Carter-Williams, who averaged 16.7 points a game this season, was the overwhelming choice for NBA Rookie of the Year in voting released Monday.

Carter-Williams, one of the few bright spots in the Sixers' dismal 19-63 campaign, was only the third player since 1950-51 to lead all rookies in scoring, rebounding (6.3) and assists (6.2), joining Oscar Robertson (1960-61) and Alvan Adams (1975-76).
He received 104 out of a possible 124 first-place votes and finished with 569 points among balloting by national sportswriters and broadcasters. Orlando's Victor Oladipo was a distant second with 16 first-place votes and 364 points.

Utah's Trey Burke, Brooklyn's Mason Plumlee and New York's Tim Hardaway Jr. rounded out the top five.
Allen Iverson is the only other player in Sixers history to win the award. The 11th overall selection in last year's draft out of Syracuse, Carter-Williams is the first player picked 10th or lower to win since Mark Jackson did it in 1987 for New York.
CREDIT / SOURCE - ESPN
Posted by Mix Masta B at Monday, May 05, 2014