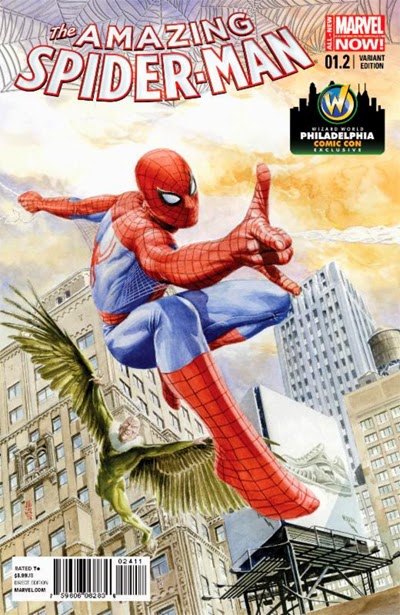 
VIP attendees at Wizard World Philadelphia Comic Con, June 19-22 at the Pennsylvania Convention Center, will receive a free copy of the limited-edition book at registration.

Jones is scheduled to be on site at the event to sign copies (autograph fees may apply). Leading professional comic grader CGC will also be on hand to accept books for grading and Signature Series.

The colored version of Amazing Spider-Man #1.2 will be limited to 4,000 copies and provided free at registration to all Wizard World Philadelphia Comic Con VIP attendees, including any celebrity VIP packages.

"J.G. Jones is one of the top-flight talents in the industry," says Marvel SVP, Sales & Marketing David Gabriel. "His covers and interior work for Marvel and other publishers have stood the test of time and we're thrilled he could contribute a gorgeous variant cover to Amazing Spider-Man #1.2."

Jones is always a big hit at Wizard World shows. His works include "Brian K. Vaughan's Y: The Last Man," the "Villains United" series and Grant Morrison's "Marvel Boy." Jones earned Eisner Award nominations in 2002 for "Codename: Knockout" and "Transmetropolitan" and in 2006 for "Wanted."

"J.G. is one of the top creators in the industry. His art on Spider-Man is absolutely incredible," says John Macaluso, Wizard World CEO. "Once again, we are pleased to have J.G. on hand to sign these limited edition books for the fans."

J. Jonah's Jameson's crusade against Spider-Man kicks into overdrive! He warned us! He told us that kids might try to emulate Spider-Man! And he was RIGHT! Meet CLASH, New York's newest menace. He may be Spidey's biggest fan, but he's about to become one of his worst enemies. Wanted by the cops, turned away by the Fantastic Four, his grades are slipping, and he still hasn't figured out this whole crime-fighting-thing. Pete's not a hero... not yet... but he'll get there. Somehow. Writer: Dan Slott; Artist: Rámon Pérez; Cover: Alex Ross.

For more on the 2014 Wizard World Philadelphia Comic Con, go to http://www.wizardworld.com/home-pa.html.

The full event schedule can be found at www.wizardworld.com.