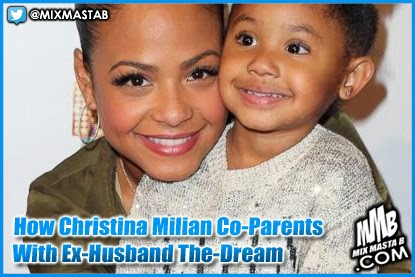 Christina Milian is a chart-topping R&B and hip-hop star best known for hits like "Dip It Low" and her star run on "Dancing With the Stars."
It is a much more personal role, however, that means the most to Milian: being a mother to 4-year-old daughter Violet Madison Nash.

When Milian teamed up with the parenting blog Momtastic last month to share her motherhood experiences, it was a blog she wrote on co-parenting that struck a chord with other moms.
"I feel like I'm in a good place, then all the better to just put it out there and hope that it can help someone else," Milian told ABC News of why she decided to make her private life public.
"We all figure it out," she said. "Sometimes, you just got to take it, take the lesson, and learn, and know that this happened for a reason."
Milian, 32, divorced Violet's father, singer-songwriter The-Dream, in 2011, when their daughter was just a few months old.
The singer says she gets past the rough points of dealing with a former spouse by allowing herself to pause and remember what's important.
"I say, 'Take a second and breathe,'" Milian said. "You know, have the best intentions. Pray on it."
Milian revealed she also got outside help - in the form of a therapist - to help her learn how to communicate with her ex, whose real name is Terius Nash.
"I think that communication will save you half the drama," she said. "You know, it makes things so much easier. And I think I learned that.
"My motivation at the end of the day was making sure that my daughter had two parents that were in her life consistently," Milian said. "She's a really smart girl and I think she has a healthy understanding of knowing that mommy and daddy are no longer together but we both love her."
Engaged since last year to Jas Prince, Milian says another important aspect of co-parenting is to know when to introduce a new partner to your child.
"I think it's very important to take your time when introducing a new person into your child's life," Milian said. "You want to make sure this is going to work out so you're not introducing them to a new person over and over again because you never know who is going to be the one."
Posted by Mix Masta B at Sunday, May 04, 2014