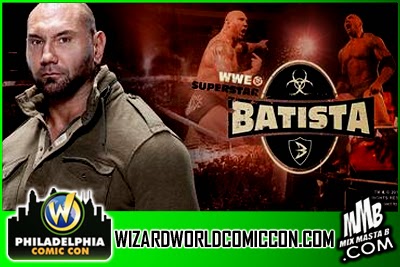 Taming wild animals is best left to trained professionals. Taming “The Animal” is another matter entirely.
If Batista always appeared in control of his meteoric rise through the ranks of WWE, that’s because you’re not counting his tempestuous formative years. That what would ultimately bring the six-foot-six, 290-pound brute to the top was his ability to avoid the perils and violence all around him in his troubled youth.


He didn’t ask to be born into a rougher part of Washington, D.C. that delivered three early reality checks in the form of homicides committed on his parents’ front lawn. He cannot undo becoming estranged from his parents by age 17, nor the assault charges he accrued and probation he served for unleashing his violent temper on two unruly patrons at a club where Batista worked as a bouncer.
But rather than let his past pull him down, Batista rose above it by setting a goal of becoming an athlete and entertainer. He trained under Afa at the Wild Samoan Training Centre in Allentown, Pa. and redoubled his efforts after a WCW scout told Batista he’d never make it – only to find himself thriving in the independent circuit shortly thereafter. Two years later, WWE finally came calling.

The Bella Twins will appear on Friday, June 20, from 4:30-7 p.m.; Bruno Sammartino is set for Saturday, June 21, from 11 a.m. - 2 p.m.; Batista is scheduled for Saturday from 2-6 p.m.; and John Cena is slated for 11 a.m. - 3 p.m. on Sunday, June 22. Final schedules for photo ops, autographs and panel programming (the Bella Twins and Batista will conduct Q&A sessions during their respective allotted times) will be released shortly. Tickets for all events are extremely limited.

“I always have a great time meeting the Cenation fans at Wizard World events,” says Cena. “I can’t wait to return to the ‘City of Brotherly Love,’ for Wizard World Philadelphia Comic Con.”

“I’ve always loved meeting the WWE Universe,” says Batista. “Philadelphia has an incredible fan base, and I’ve heard so many great things about the Philadelphia Comic Con from my fellow WWE Superstars, so I can’t wait to be a part of it! And with my upcoming appearance as Drax in Guardians Of The Galaxy, it makes this appearance all the more special as I get to see my co-stars Karen Gillan and Michael Rooker!”

The appearances of the five follow those of other WWE stars at recent Wizard World shows, including WWE® Superstars Sheamus®, Randy Orton®, WWE® Diva AJ Lee™ and others. It was also recently announced that Big Show® will make his Wizard World debut at Atlanta Comic Con in May.