Report: 'Cowboys will figure out a way to get Manziel' - #MMBSports 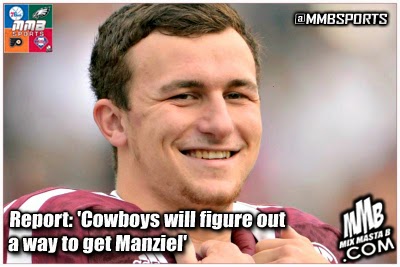 Johnny Manziel has been one of the favorites in the discussion of what the Houston Texans will do with the No. 1 overall NFL Draft pick.
But the 2012 Heisman Trophy winner might end up with the other team in Texas.
According to a report by ESPNCleveland.com, CBS Sports NFL announcer Jim Nantz says he has heard that the Cowboys will do whatever it takes to bring Johnny Football to Dallas.


"I've heard this rumor for a month -- the Cowboys will figure out a way to get Manziel," Nantz told ESPNCleveland.com. "Wherever Manziel goes, there is going to be more clamoring about Johnny Manziel than there would be about Blake Bortles going No. 1 or (Jadeveon) Clowney going No. 1, or anyone else. This is a guy that there's just a tremendous interest in everything he does."
There's been talk all offseason about the Cowboys' possible interest in the Manziel, but it didn't seem likely with Dallas picking 16th in the draft and quarterback Tony Romo getting a six-year, $108 million contract extension last year.
The Cowboys also signed former Cleveland Browns quarterback Brandon Weeden to a two-year deal last month.
But you never know what Jerry Jones will do despite dismissing rumors about Manziel earlier this year.
"No doubt in my mind [Manziel] is going to be an outstanding NFL football player," Jones said on KRLD-FM 105.3 The Fan. "But we have Tony Romo, and Tony Romo is our ticket."
Cowboys executive vice president Stephen Jones also said that all the Manziel talk is "purely speculation."
Manziel has met with the Cowboys' owner this offseason and said playing for "America's Team" would be a dream come true.
"Growing up a Cowboy fan ... I was born at halftime of a Cowboys game," Manziel told the Fort Worth Star-Telegram in February. "That would almost be a folktale in the correct direction."
CREDIT / SOURCE - FOX Sports