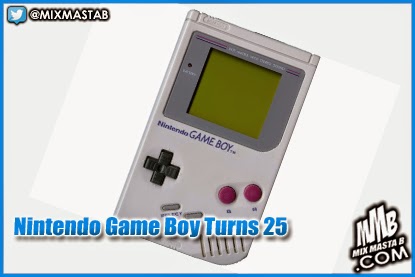 The Nintendo Game Boy is now a man.

The ground-breaking handheld games machine was released 25 years ago today in Japan on April 21, 1989.
While it didn't make its way officially to the UK until 1990, it almost immediately changed the way we looked at video games - and portable gadgets. Yes, it played a mean version of Tetris. But it's almost fair to say it also paved the way for handheld gadgets like the iPod and the iPhone - both of which arguably pay a passing resemblance to Nintendo's grey brick of joy.
And of course, the Game Boy had a long life itself.
It was an immediate success on its launch, and went on to sell 118.69 million units (along with its successor, the Game Boy Colour). It was also redesigned in 1996 and 1998 as the Game Boy Pocket and Game Boy Light (in Japan).
Needless to say, the later Nintendo DS and 3DS also have more than a little to do with the original Game Boy's success.
CREDIT / SOURCE - Huffington Post UK
Posted by Mix Masta B at Monday, April 21, 2014