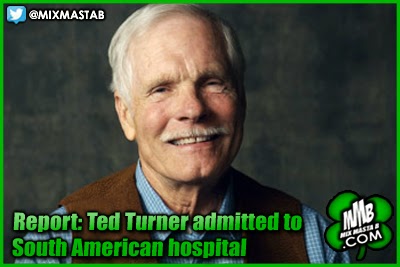 (CNN) -- CNN and Turner Broadcasting System founder Ted Turner was admitted to a hospital while traveling in , his spokesman said Friday.

The spokesman, Phillip Evans, did not indicate where specifically Turner was treated or for what ailment, saying "it is our policy not to comment on his personal health." Evans said that Turner was hospitalized "for observation."

's state-run Telam news agency, reported that the 75-year-old was initially treated in Bariloche, a lakeside city near the Chilean border, about 1,500 kilometers (940 miles) southwest of .

Turner arrived at a clinic there around 4 a.m. (2 a.m. ET) suffering from acute abdominal pain, according to clinic spokeswoman Paula Redondo. She told Telam that Turner was with a personal nurse and assistant.

Doctors diagnosed the media magnate and philanthropist with appendicitis and recommended that he undergo surgery. Turner was flown later that morning to the capital of to have the operation, according to Telam.

Soon after graduating from and serving in the U.S. Coast Guard, Turner took over the family business -- Turner Advertising -- in 1963. Seven years later, he bought TV stations in , , and to kickstart a media empire that would one day include TBS, TNT, HLN, Cartoon Network, TCM and CNN, which launched in 1980.
In 1996, Turner sold Turner Broadcasting to Time Warner, though he remained active in the business for several more years.

Besides his business ventures -- including the Ted's Montana Grill chain and the renewable energy company RT Solar -- Turner has been one of the most generous philanthropists, including a $1 billion donation to the United Nations in 1997.