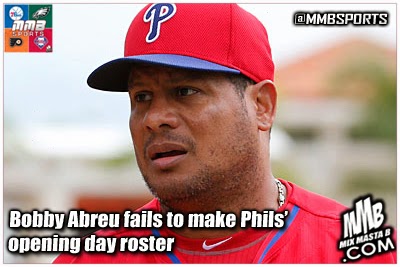 CLEARWATER, Fla. – Bobby Abreu's bid to make the Phillies' opening-day roster has come to an unsuccessful end.
The team announced late Wednesday afternoon that it had informed Abreu he will not be on the roster when the Phils open the season Monday in Arlington, Tex.


The team was careful not to say Abreu had been released from his minor-league contract. That could mean team officials want to keep him in Clearwater for a while longer to further evaluate whether he could be a contributor to the big-league team down the road. Or it could mean the team has granted Abreu a window to see if another team has a big-league job for him.
"Bobby Abreu is still with the Phillies' organization and he is currently weighing his options," general manager Ruben Amaro Jr. said in a statement.
The decision to drop Abreu from consideration for the opening-day roster came an hour after he played poorly in right field in a game against the Detroit Tigers.
Abreu looked slow trying to chase down a windblown ball at the warning track in the first inning. He had trouble picking up the ball and the runner was able to turn a double into a triple. The play set up the only run of the game in the Tigers’ 1-0 win.
Later, Abreu got a late jump on a bloop hit. The ball fell in front of him as he slid then skittered past him, allowing the runner to take an extra base.
Abreu went 0 for 3 in the game with two strikeouts. He lined out to third against Justin Verlander in his first at-bat.
Abreu, trying to make a comeback at age 40 after not playing in the majors last season, handled himself adequately at the plate throughout the spring. He hit .244 (10 for 41) with three doubles, a triple and 10 walks.
In order to get Abreu the occasional at-bats needed to stay sharp at the plate, the Phillies needed to be able to play Abreu in right field at times. The evaluation of Abreu in the field was slowed as the player dealt with a sore left shoulder in recent days. But on Wednesday, manager Ryne Sandberg put Abreu in right for the whole game and results were not good.
Here’s what Sandberg said after the game:
“I wanted to see Bobby in right field today and I got a chance to see him.”
That’s not exactly gushing.
On the first-inning triple, Sandberg said: “The wind was blowing it [toward the line]. That ball was working away from him. I think more of a speedy guy makes that play. Then he missed picking it up.”
On the bloop hit later in the game, Sandberg said: “He got a late jump on that one.”
So with Abreu out of contention, who will end up on this bench?
Infielder Cesar Hernandez, backup catcher Wil Nieves and outfielders John Mayberry Jr. and Tony Gwynn Jr. appear to be locks. Who will be the other infielder? Will it be non-roster player Reid Brignac? Will minor-league infielder Andres Blanco fill the spot until Freddy Galvis comes off the disabled list in a few weeks? Blanco is accompanying the team to Philadelphia for exhibition games Friday and Saturday. Top prospect Maikel Franco is also slated to be in Philadelphia. Would the team think about bringing him to majors then burning an option to send him down in a few weeks? Or is the final bench piece currently with another team? The Phillies have made late-camp trades and signings in the past.
While Abreu was viable, the Phillies considered a six-man bench to start the season. They could still go that way if they added two players. But they could also go with a five-man bench and bring an eighth reliever.
The bullpen right now looks to shape up this way: Jonathan Papelbon, Antonio Bastardo, Jake Diekman, Brad Lincoln, B.J. Rosenberg and Mario Hollands. The seventh man could be Justin De Fratus, Shawn Camp, Jeff Manship or Phillippe Aumont. Take two if it’s an eight-man bullpen.
Opening day rosters are to be filed with Major League Baseball by Sunday afternoon. Clearly, the Phils have a lot of decisions to make.
They've made a big one already.
Bobby Abreu, looking for a storybook return with the Phillies, won't get it. At least not on opening day.
CREDIT / SOURCE - CSN Philly
Posted by Mix Masta B at Wednesday, March 26, 2014