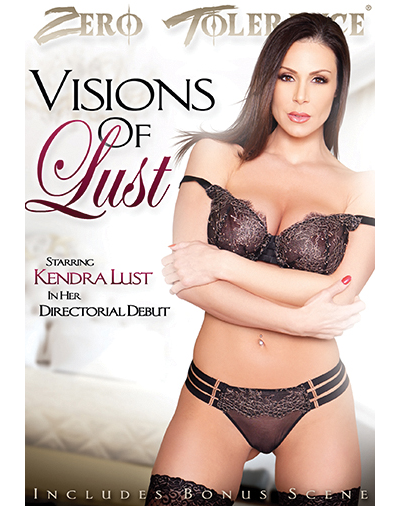 "Directing Visions of Lust was a really incredible feeling for me," said Kendra. "It felt really cool to be able to come up with the scene scenarios and be able to express them on film. Each scene was something very similar to what I have fantasized and masturbated about before! So, it was really hot to watch my sexual fantasies happening right in front of me! Mike Quasar and Zero Tolerance provide me with a lot of creative control and that makes directing so exciting!"

Promotional images as well as the trailer for Visions of Lust can be found on the Zero Tolerance site here:http://bit.ly/KendraVoLTrailer.
Recently popular mainstream music and entertainment site 88 Miles West caught up with Kendra to discuss the trajectory of her skyrocketing career and what the future holds for the award winning beauty. The video 88 Miles West interview with Kendra can be viewed here: http://bit.ly/KendraLust88MIlesWest.
The wait is over! Kendra Lust’s Visions of Lust is available from adult retailers now. Watch her discuss the movie and her other projects with 88 Miles West!
For more Kendra Lust, please visit the Kendra Lust network:
www.Twitter.com/KendraLust
www.KendraLust.CamModels.com
Kendra Lust is represented by Society 15 and can be booked via:
Society15.com
bookings@society15.com
(310) 801-1990
To book Kendra Lust for a feature dance appearance, please visit:
www.AListFeatures.com
To interview Kendra Lust for your website and/or publication;
Please contact Star Factory PR:
(818) 732-0191
Info@StarFactoryPR.com
A press release by
www.StarFactoryPR.com
Posted by Mix Masta B at Sunday, February 28, 2016