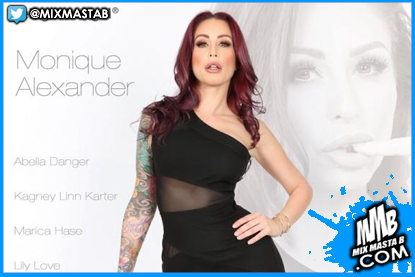 Los Angeles - Elegant Angel is one of the first names for gonzo, all sex scenes, a formula that has kept fans satisfied for years. But Elegant Angel knows that there are fans out there who crave a bit more, which is why they are pleased  the release of their first feature in years. On September 10th, "The Darkest Shade" from writer and director Sid Knox will be available on retail shelves and websites everywhere, with pre-orders shipping immediately. "The Darkest Shade" features an all-star cast, including Monique Alexander, Abella Danger, Kagney Linn Karter, Lily Love, Marica Hase, Prince Yahshua, Isiah Maxwell, and Rico Strong.

He continued, “After running into early production problems, we finally locked in a great cast and some cool locations. Huge respect and gratitude to the cast and crew for making this one happen. Everyone knew Monique could act, but it was cool to see Prince bust out some lines! That dude continues to be top of the game. Strong performances all around! Hope you all like it.”

Elegant Angel will ship all pre-orders of “The Darkest Shade” starting today, and copies will be available for purchase online and at retail stores everywhere on September 10th. Fans can view the trailer at https://elegantangel.empirestores.co/2532902/darkest-shade-the-porn-movies.html.

Elegant Angel’s official membership website, ElegantAngel.com, boasts a catalog of over 950 movies, including classic content to exclusive access to new scenes and BTS before they are released on DVD. Members can watch online through a Roku streaming device, and enjoy a 10% discount on all sex toys and DVDs purchased through their official online store. Elegant Angel offers several membership packages to fit every budget, starting at just $0.41 a day.
For sales inquiries, please contact Jerry at sales@elegantangel.com or 818.576.9464. Broadcast and foreign inquires can be directed to juicyvideo@aol.com.